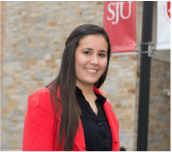 Thalia Olaya
President of Phi Beta Kappa and secretary of the honors club, criminal justice major Thalia Olaya is the recipient of numerous awards and scholarships, including the SUNY Chancellor’s Award for Student Excellence and the Get There From Here scholarship. After graduating from Suffolk, she will continue her studies at St. John’s University where she will pursue a law degree. Her goal is to practice family and criminal law in the prosecutor’s office. She credits volunteering, networking and a whole lot of hard work for her continued success.
(4:15)

Bryan Nee
Having played football and lacrosse for eight years prior, theater major Brian Nee discovered his love for acting when he auditioned for a play in high school. Proud recipient of the Get There From Here scholarship, he credits it for motivating him towards volunteerism and community outreach. He is thankful for Suffolk for giving him memorable opportunities that will continue to motivate him long after graduation. “As long as I stick with something I love doing,” he says, “I will always be happy.”
(2:40)

Chip Williford
One would never know it, but Chip Williford, a student in the Radio & Television program at Suffolk County Community College, grew up with a speech impediment; when he was a young child, he couldn't speak at all. With the help of Adjunct Professor William Terry, he was able to overcome his difficulty and now works in the radio and television industry.
(3:09)

Catherine Amos
Violist Catherine Amos, a student in the Music Education program at Suffolk County Community College, used to play violin, but after being accepted to the New York School of Orchestral Studies (NYSSSA) for viola, she changed her focus. She is the president of the Music Society Club at Suffolk County Community College, and credits Professor Ralph Williams for all the support he has given her. Very special thanks to our Radio & TV intern, Bismarck Toribio, who edited this video.  (2:38)

Tara Hack
Tara is a  student in the Radio & Television program at Suffolk County Community College with a passion for music.

Matthew Mayers
Matthew Mayers enrolled in the Suffolk County Community College Honors program at the age of 16, and in 2013, graduated with a degree in Liberal Arts, Biology. He is a STEM (Science, Technology, Engineering and Mathematics) scholar, and recipient of the SUNY Chancellor's Award. He will be furthering his studies in neurology at Cornell University.

Frank Meza
A native of Peru, Frank Meza enrolled in Suffolk County Community College and became immersed in the athletics program, specifically, track and field. Eventually, his positive experience with athletics inspired him to join the Association of Latin American Students (ALAS). Meza is now not only the president of ALAS, but he also is a member of the Academic Standards Committee and the Persons with Disabilities Committee. Meza loves telling students that they can succeed.

Raymond Page
Raymond Page, the Editor-in-Chief of Compass News, explains why he feels that self-recognition is the most important vehicle for personal growth. A member of SCCC Honors College, Sigma Kappa Delta English Honor Society, and a two-term VP of Fellowship for Phi Theta Kappa, Page continues to inspire others with his leadership.  (3:10)

Dominick Sarazen
One of Dom's first videos has more than half a million views! Take a look at this video to learn more.

Student Leadership Development / CLUBS
Suffolk County Community College student leaders reflect on their involvement in activities outside of the classroom and the impact those experiences have had on their learning experience.
2013 / 3:12